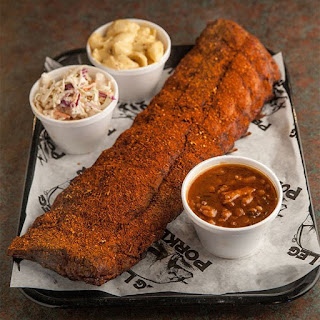 When you come to the South, you expect good food, and we don't disappoint. BBQ is a popular choice to many a hungry visitor to Nashville, and these are my personal top picks for ribs, sandwiches, and sides here in Music City.

Peg Leg Porker opened their doors in 2013 by owners Carey and Delaniah Bringle.  (Funny, I had a heart attack in 2013…coincidence?)  This family owned and operated establishment and pit-master have won numerous awards for their barbecue.

I have to say that my litmus test for barbecue is ribs.  If a place has good ribs, then I know everything will be good.  I hate when you go places, and the ribs are super fatty.  These pork ribs are fall-off-the-bone delicious.  And the bark is wonderful.  The sides are made from scratch and terrific.  I highly recommend getting the dry rub ribs and adding the sauce at the table.  The dry rub is quite flavorful, and I am partial to the spicy sauce.  They also offer a lunch special Monday through Friday from 11am to 3pm:  a barbecue sandwich, a side, and a drink for $8.90.  There may be a line, but it goes quickly.  Order your food first, then, by the time you get your drink, they are calling your name to pick up your food.    They also have patio-seating.

Jack Cawthon began his Jack’s Bar-B-Que in 1989 on the corner of Broadway and 1st Avenue.  This location is now the parking lot of the Hard Rock Café.  Jack’s became one of the first casual dining establishments to set up downtown on Broadway since the area’s decline in the 70s.  Jack’s style is a mix of Texas and Tennessee barbecue, including brisket and a variety of sauces.  In 1994, Jack’s relocated to its current location next to Robert’s Western World.  You’ll recognize the location by the neon sign of pigs flying on Broadway.

The downtown location is cafeteria-style, so don’t worry about the line.  It goes quickly.  Point to what you want.  They put it on the place, and you’re out the door.

Matthew Charette opened Drifter’s in 2009 in the Five Points area of East Nashville.  He successfully launched his first restaurant in 2003 with Beyond the Edge, and then opened Batter’d & Fried in 2006.  He is responsible for making that little corner of Five Points the vibrant scene that it is today.  Their meats consist of pulled pork, pulled chicken, brisket, ribs, and sausage.  They also offer vegetarian options as well.

Edley’s has multiple locations around Nashville. The ribs are good, but only served for dinner. The white sauce is something to try. They have a dog-friendly patio. They offer a delicious Bushwacker frozen drink and local craft beers.

Posted by Christy Eidson at 9:18 AM

Other Ways To Find Me